Ask Question
Asked 6 years, 1 month ago
Active 6 years ago
Viewed 702 times
14
Closed. This question is opinion-based. It is not currently accepting answers.

Want to improve this question? Update the question so it can be answered with facts and citations by editing this post.

We love to hear about your projects! But which is the most ambitious, exciting, or downright crazy?!

The project was formerly named Echo, but it was brought to my attention that Amazon Echo had the same name.

Nano is an intelligent assistant for the Raspberry Pi, similar to Jasper or Siri, but fully customizable. It uses pocketsphinx and sphinxbase for speech recognition, but it's brain is built in Python. Nano can tell you the time, the current weather in your area, the temperature of the CPU, play you a song, search WolramAlpha, set an alarm, and much much more.

Nano has been in development by myself since July 2015. The next step of my project is to put it in a Raspberry Pi Zero, and make it mobile. The plan is to have it in my bag, with a microphone clipped to the inside of my shirt, and the command line accessible via bluetooth, even though Nano requires no command line interaction.

As Nano is completely customizable and vary versatile, I have given a few of my friends each a copy to see what they would use it for, here are my favorite uses:

In late August, I emailed a copy to one of my pals from Calculus, and a few weeks later he invited me over to see what he had done. In his house he had a wireless microphone in every major room, living room, kitchen, and his bedroom. Adjacent those microphones were speakers. He had uploaded his 28Gb of music to his Pi, and taught Nano the names for every song, every artist, and every album. All he had to do was say the magic words, and Nano would play whatever he wanted him to play.

In mid September, I gave another copy to another friend who had just bought his first Raspberry Pi. Within a few weeks I found out that he had wired relays all over his home, as well as microphones. He could turn on and off every light and every electronic device just by telling Nano what room and what appliance. Sorry if this description isn't very good, I'm more of a software guy, so understanding exactly what he did is a little beyond me.

Over the next coming months I plan to keep improving and adding on to Nano, but sadly in August of 2016 all of my time will most likely be destroyed by the giant time consuming black hole known as college. 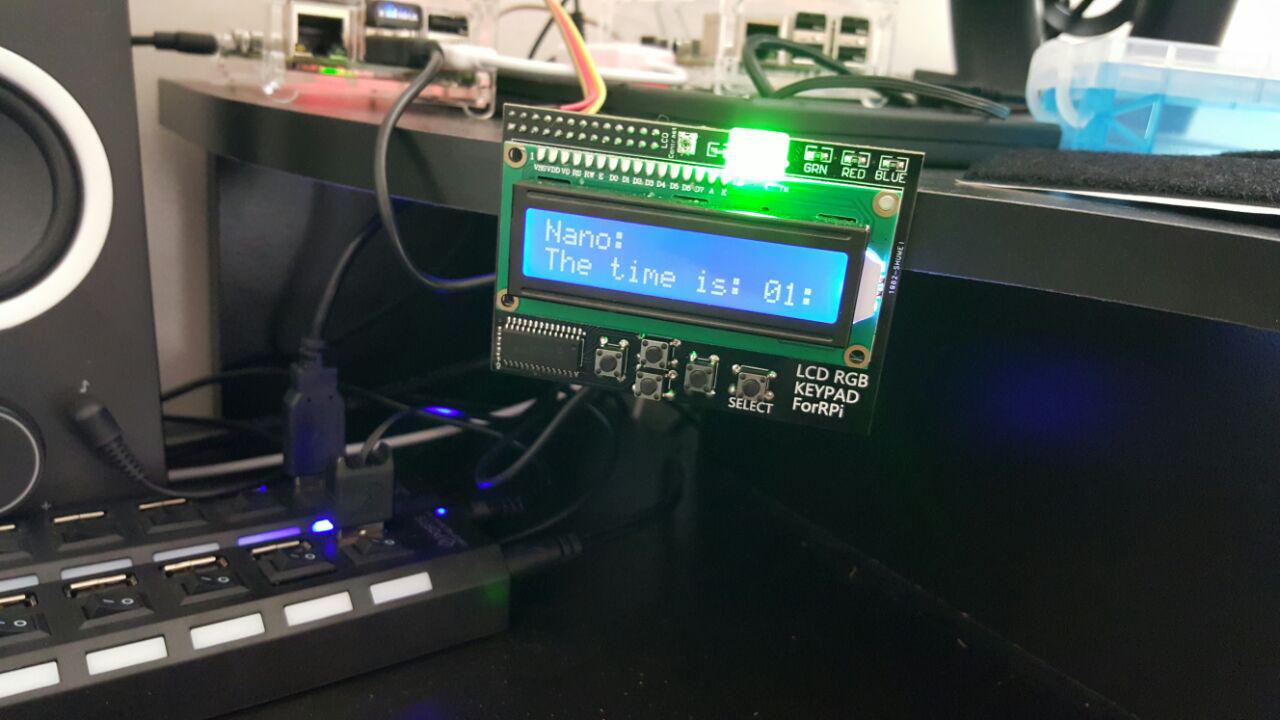 Testing for compatibility with LCD screen 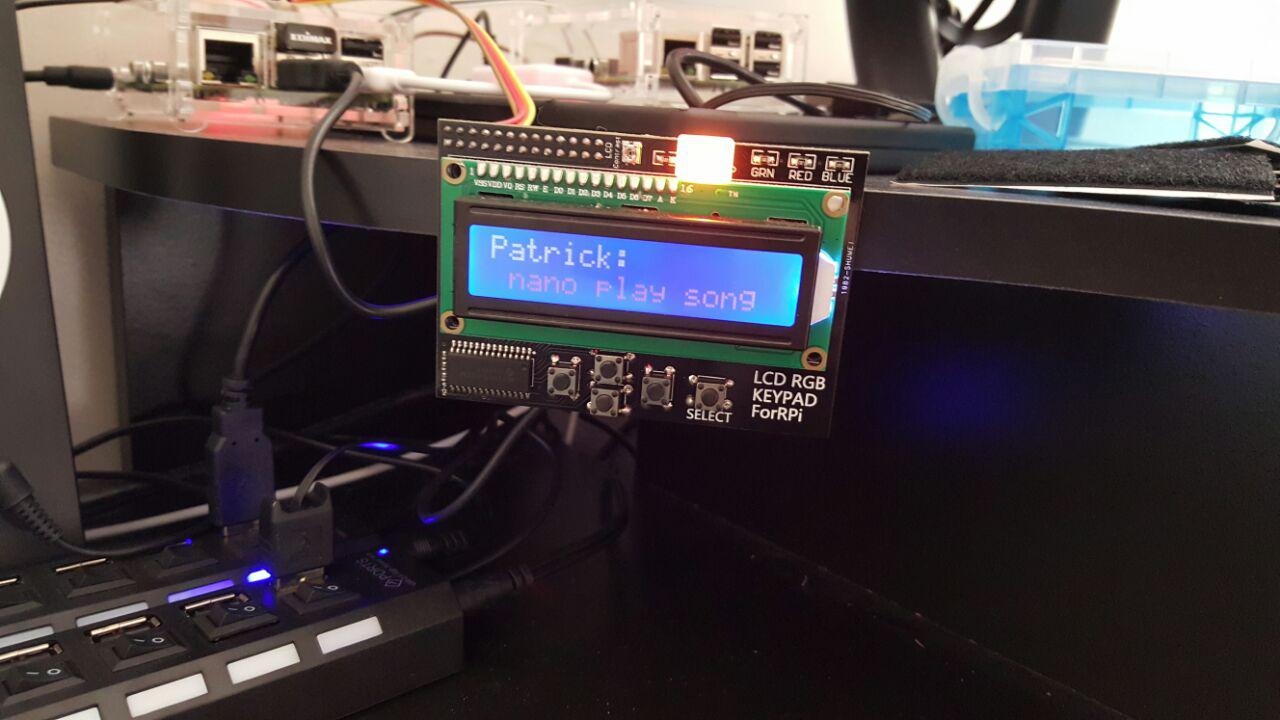 Nano for the Raspberry Pi Zero

I feel like my project is a little pedestrian, but since no one else has posted, I'll break the ice.

I've recently (as in the last month or so) started a project to more easily display recipes in the kitchen while cooking, and share with family/friends.

The system is built as a responsively designed web application with an oath2 login. Currently it's using HTML5, jQuery, and Bootstrap 3. The primary use will be for the RPi screen and phones, but I want to make sure that the interface is also useable on the desktop.

In the RPi's case, the RPi should boot directly into a web browser in Kiosk mode.

Currently the only supported database is PDO sqlite, but I would like to later add support for PostgreSQL and maybe MySQL (I hate MySQL, so, unlikely). The backend API is written in PHP5.

The project is in the pretty early phases. I've worked out most of the database storage, and have implemented roughly 200 of my families recipes. Currently, they display well but a lot of work is still needed with the login system, physical RPi implementation, and interface tweaks.

I'm in the initial stages of my Home Automation project which will include:

I have had other related ideas but this is the current design brief to be going on with.

Note: Some parts of the above require work (in the UK) to be certified to Part P of the UK Building Regulations do not try this at your home unless you know what needs to be done and the right people to do it.

Update: Had the fitters back to tweak a couple of things - one of which was a door chain that was missing (so you can open the door a little to talk to someone without releasing the door completely).

The only trouble was the muppet who drove all four of the fixing screws into the body of the door-lock motor assembly, destroying it (one actually went into the armature, the "spinney-thing" in the centre, of the little electric motor that worked the unit). He wasn't aware of the extra thing inside the body of the door even though I'd previously, proudly, pointed out the "electronic-ness" of my purchase!

Of course the unit also completely jammed, leave the door with its locks also jammed in the open position and thus totally insecure. Fortunately we were able to release the wreckage from the rest of the lock mechanism, leaving it mechanically operable, and I am now awaiting their return with a new unit that they will have to pay for... grrr

LeoFib is planning to use his Raspberry Pi as a text-to-speech translator and large-display monitor for a 90yr old lady who is rapidly losing eyesight, so she can use the internet and listen/watch audiobooks and movies.

I think this project is a great candidate for this category, as it is not only a great and not common usage of a Raspberry Pi, but it also scores many points in the "altruistic" category (which I just totally made up), and fits right in with the Christmas spirit.

I'm quoting LeoFib's question to give more details on this project:

I plan to do a project for a ninety-year old mother who is rapidly losing her eyesight and leads a relatively cheerless life.

She sits alone at home watching basic cable and doesn't have an internet connection. She has a huge remote control with 60 tiny buttons and is basically confused by the whole thing.

I just want to put on a hard disk a library of films and/or audiobooks so that she can navigate through them and watch at her leisure.

I've decided she needs a simple joystick with 6 large configurable buttons. I would need to find out some way that titles might be automatically read to her (as she scrolls down prior to selection).

A GUI providing HUGE text on the monitor might suffice...but I believe the text-to-speech feature might be the most difficult problem.

If the titles are read to her, a GUI is almost a moot point.

I am working on a Python script for my Pi (or any other device) that analysis a wav file to create Morse code. The Morse code is then decoded to text. Then the text is sent to the serial port, that is being read by an Arduino that then sends the data threw the SPI port to displays it on a 2x16 LCD.

and yes I know the Pi has the GPIO SPI pins but I already had the code and just plugging in the USB to the Pi was way quicker than writing it.

Not the answer you're looking for? Browse other questions tagged discussion .